In a stunning upset, Donald Trump narrowly carried Wisconsin over Hillary Clinton by less than just 23,000 votes in 2016. Trump is the first Republican to win the Badger State since Ronald Reagan’s landslide reelection in 1984. Four years later, the political landscape has changed drastically in Wisconsin; Democrats are fresh off a gubernatorial win in 2018, and Trump’s statewide approval rating regularly clocks in at more than 10 points underwater. 2016 notwithstanding, Wisconsin is still very much a blue state and squarely in the middle of Joe Biden and Kamala Harris’s path to 270 electoral votes. 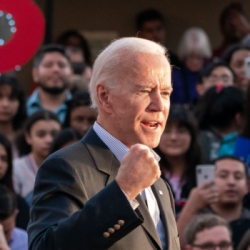 Joe Biden is the Democratic nominee for President of the United States running against Republican incumbent Donald Trump.