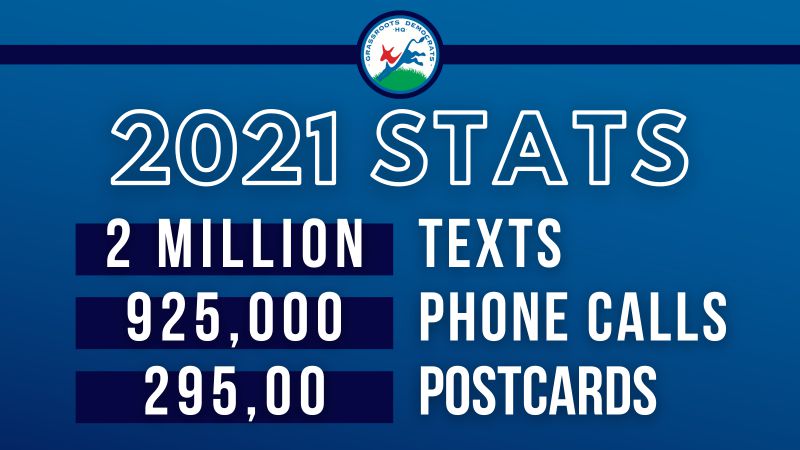 Following our historic victories in 2020, we immediately got to work in 2021 to defend and expand our Democratic majorities nationwide. We contacted millions of voters to resoundingly defeat the Republican recall of California Governor Gavin Newsom, and we laid the groundwork for victory in 2022 in our target House districts. While we suffered narrow losses in the Virginia gubernatorial and House of Delegates elections, we turned out a record number of Democratic voters, which was imperative for Democrats retaining their State Senate majority. 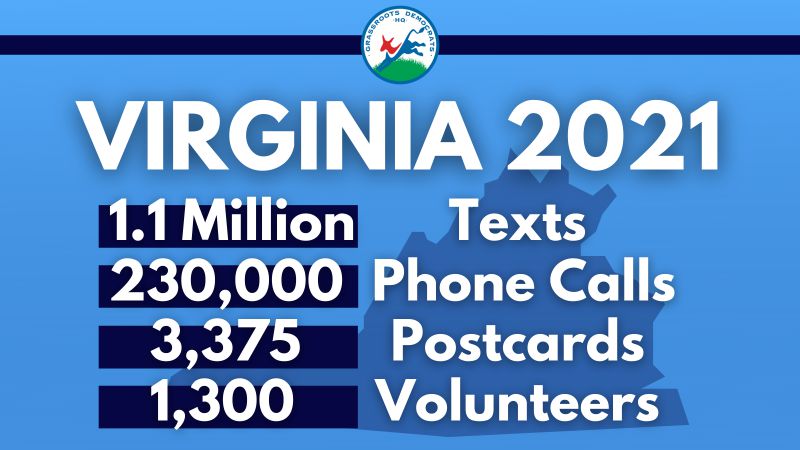 Despite making up the largest share of the electorate of any generation, young voters are often overlooked by traditional campaigns and voter mobilization efforts. The Grassroots Democrats HQ partnered with Blue Future to pilot a unique program to help resolve this issue. By utilizing peer-to-peer text banking and following up with a phone call, our Young Dems contacted 89,000 voters ages 18-29 to get out the vote in Virginia’s swing House of Delegates districts! Our 200 Gen Z and Millennial volunteers helped nearly 2,000 young voters to create a voting plan. 200 of these voters pledged to triple their vote by asking 3 friends and/or family members to vote. We estimate this program boosted youth turnout in our target districts by 3-4%. 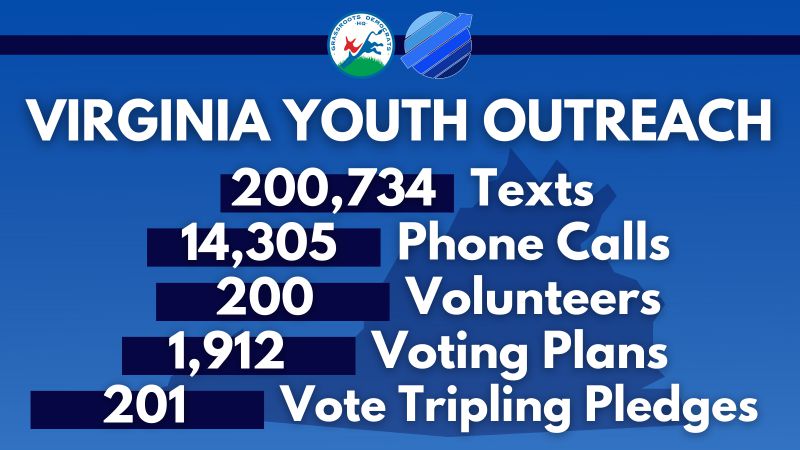 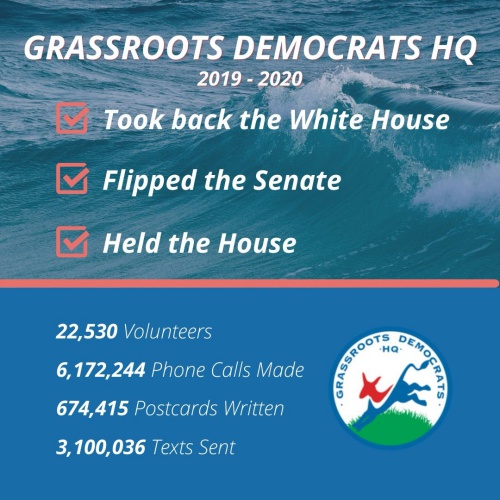 The Grassroots Democrats HQ was founded in 2019 with a simple mission: defend the House, flip the Senate, and take back the White House in 2020. We played an integral role in making this mission a reality, partnering with the Biden campaign while working on seven Senate and nine House races. Here is just a brief snapshot of our accomplishments:

We could not be more thankful for the tremendous volunteers, staff, and donors who made this possible. For a closer look at each state we worked in, please visit the Swing States menu.

The Grassroots Democrats HQ was proudly the official GOTV virtual staging location for Progressives for Biden and Seniors for Biden. Together we made 4.7 million phone calls to voters in swing states nationwide in support of Joe Biden and Kamala Harris. We also wrote 316,000 postcards for the Biden/Harris ticket in partnership with Women’s March Action.

Joe Biden defeated incumbent Donald Trump by an Electoral College margin of 306-232. The Biden/Harris ticket flipped five states that voted for Trump in 2016, all of which were Grassroots Democrats HQ targets: Arizona, Georgia, Michigan, Pennsylvania, and Wisconsin. Joe Biden and Kamala Harris received more votes than any presidential ticket in our nation’s history and won the popular vote by 4.5%. 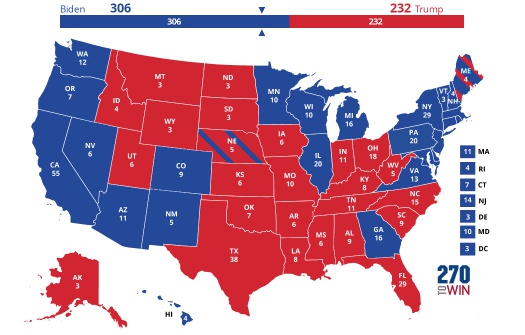 Following the 2020 November elections, three critical statewide elections in the state of Georgia headed for runoff elections in January of 2021, two of which would decide control of the United States Senate in 2021 and 2022. The Grassroots Democrats HQ immediately shifted our virtual infrastructure to flipping Georgia blue, proudly partnering with the Reverend Raphael Warnock, Jon Ossoff, and Daniel Blackman campaigns as well as the Georgia Democratic Party. 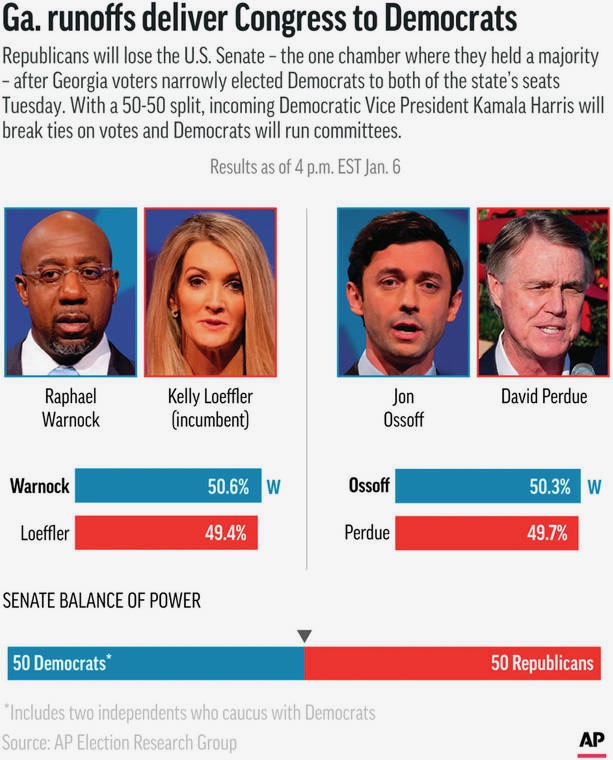 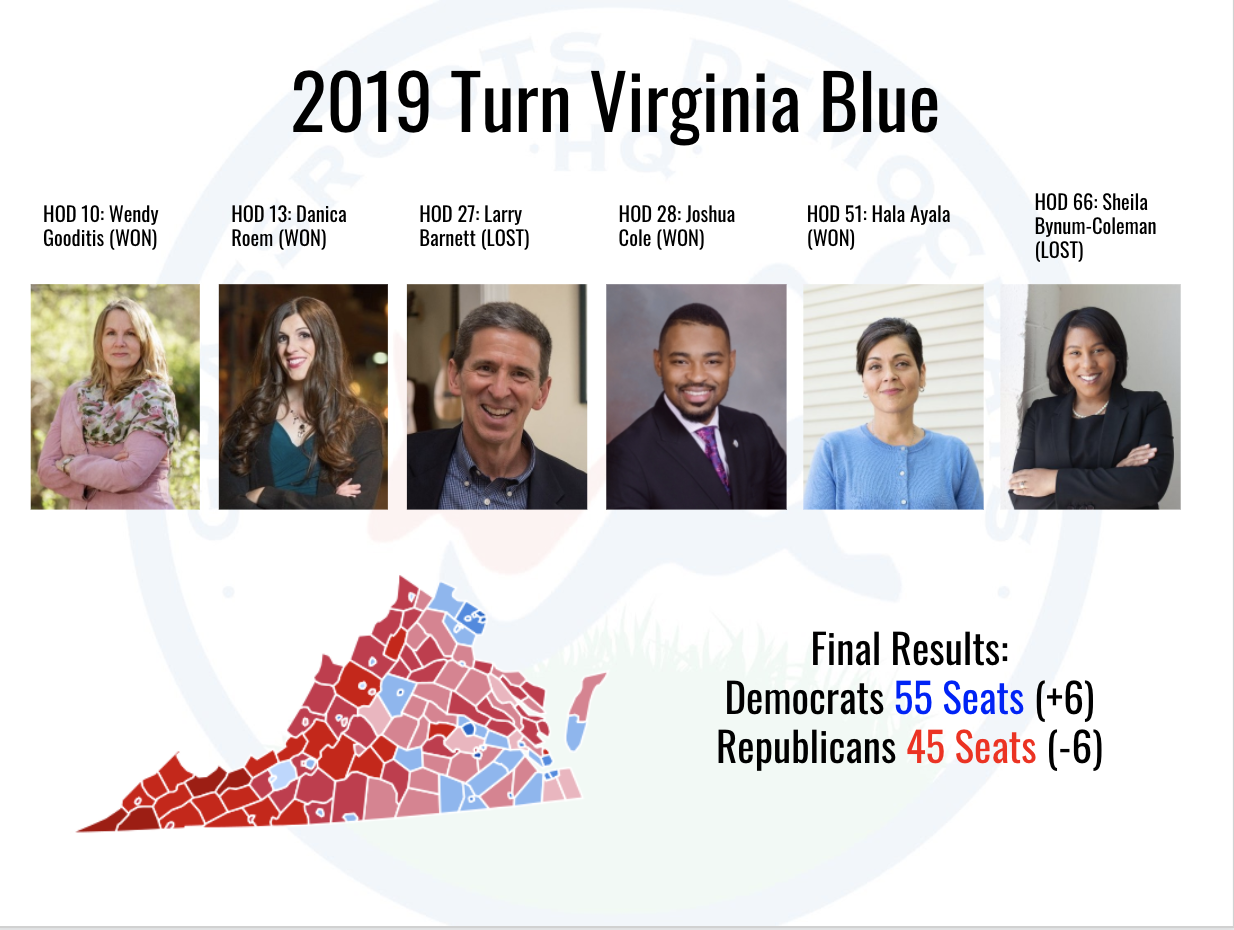 From April through November 2019, we worked tirelessly to help flip the Virginia House of Delegates and State Senate. Our efforts paid off. Thanks in part to 20,000 phone calls and 13,000 letters from our volunteers, Democrats won a 55-45 majority in the House of Delegates and a 21-19 majority in the Senate, giving Democrats total control of Virginia’s government. As a result, Virginia will be able to end Republican gerrymandering in the state, pass universal background checks, and ratify the Equal Rights Amendment.